Having a man who is sexually attracted to you is a super sexy feeling. It increases your sexual confidence, boosts your lust and makes you feel more desirable (well, of course, why not!). I know this is a tempting feeling and you can hardly resist but bite your lips with sexual desires, but do you really pick on the signs he throws at you that just screams ‘I want you!’ (and you very well know, how!)

Signs He is Sexually Attracted to You

Are you not sure if the man is actually drooling on you ‘physically’? Are you craving to know the signs that will guide you to know if he wants you? Well, if you just said yes, here’s your dirty guide to the kinkiest call- 15 obvious signs a man is attracted to you sexually. Let’s get you started!

Men are extremely stupid in hiding their sexual feelings for a woman they are genuinely tempted to lust. They can’t keep their eyes off their woman’s sexy thighs, irresistible lips and their assets (of course)

If he craves for you sexually, you will know it by the way he looks at you. If you’ve often caught him staring at you or trying to make constant eye-contact, this guy might be head over heels for your body. This is a silent indicator of how

he is probably getting it erect under his pants for you and well of course that is an obvious sign a man is attracted to you sexually. How hot is that?

2. The touch does the talking

Men cannot keep up with the idea of how sexy you feel to them. Eyes are not enough for them to check you out from head to toe they want more and more. A guy who lusts you deeply is sure to try and touch you whenever he can.

Might be in a club while you are dancing or when he hands over the drink to you at the bar, they have to do it.
If your man is wanting to touch you constantly, trying to grab you by the waist or hold that booty, he is craving for it underneath!

3. The legs are apart

This is a secret that no man will ever want you to know. Men themselves don’t realize this habit while they are tempted towards a woman. It happens to them naturally.

Men love smiling around a woman they lust deeply. They cannot keep away from the tempting ideas of sex that revolve in their mind when they see you. Such things often make a man smile, rendering them helpless.
Men also use smiles to flirt with a woman they sexually want.

Men love flirting but they will not want to put in the extra effort for someone who doesn’t tempt them as much. If you feel irresistible to them, they won’t want to spare their try on you.

This guy will make sure he flirts majorly with you to get you to have sex with him. He might give vent to your excitement by complimenting you and using a few cheesy lines to lure your attention. Once that is on, they will start oozing out their intentions slowly. If you see these signs, you know what they want from you!

Guys who think you are sexy are often too restless for things. They want all your attention because they want you. They want you to look at them, talk to them and move towards the goal faster.

This guy if he is restless for you will make sure you give him all the attention he needs. He will fidget around, get clumsy and drop things, or maybe even behave differently to steal your look. So, if you’ve ever met a man at the bar or anywhere else who always becomes restless and fidgets too often when around you, it is the most overrated sign of a man who is attracted to you sexually.

7. The instinct is GOD

A lot of us tend to ignore our instincts as we assume, they might be a cause of overthinking. But that’s not the case forever. Instincts to help us know a lot about things that might be happening around us but we are not consciously aware of.

This instinct might also be yelling at you to remind you that this guy who has been talking to you lusts you. If you’ve been getting this vibe from them, don’t let it go. It has a lot to offer to you.

8. He stands facing you

You might not have realized it, but we often tend to stand facing things that interest us all together. This might even be the case in men wanting women which makes them face these hot young ladies everywhere.

If you’ve ever caught him facing you and his entire body standing at your direction, you might just assume he is sexually interested in you. It’s a red flag!

Everyone new to each other might enjoy talking a lot and sharing conversations to know more. But have you ever noticed this guy constantly yearning to talk to you about something or the other? Or maybe even trying to dirty talk with you sometime?

Men love a lot of talking with women they are attracted towards. And if they don’t give up on the deep conversations, you might consider this a major signal for their sexual attraction towards you. It’s easy!

10. All roads lead to relationship status

Does this hot guy constantly ask you whether you are dating or single? Does he hint you about relationships and flings to steal your attention? (Then that’s a call for you to notice the signs a man is attracted to you sexually!)

Well, of course, if we are interested in someone, we will always make a point to ask them if they are available to mingle. That’s exactly what they might be doing to know whether he can have you wholly.

If this guy keeps asking you about your relationship status, yes, he might be sexually attracted towards you. They may even flirt additionally and hint you to date them if not anyone else. Don’t miss out on that!

11. He doesn’t look away when you leave

Another sexy sign that this guy might be sexually attracted to you might be that he doesn’t want to look away but stare as you leave a place. When guys just cannot resist you or like you enough to want you, they wouldn’t mind staring at you as you leave. In most cases, they might even deliberately look your way to make sure you are watching them stare at you. This only helps them to give you some clear signals about what they might be wanting from you but of course in a much decent way.

12. Never willing to isolate you

Men love spending time with women they lust. It just makes them feel excited, enchanted and hopeful for a new journey. In that case, they wouldn’t want to isolate you by any means as they want to be with you. If this guy is going everywhere with you, dropping you home late night, coming to pick you for parties and dates, it might be a hint.

Another very essential reason why they might not want to isolate you is that they don’t want to miss out on a few moments that might help you to get physically close to them.

Is he always planning to see you? Is he often texting you to see him soon? Well, again these might be clear indications as to them wanting to be with you and want you close to them. They might be wanting to meet you to be with you. If this guy is constantly asking you to make plans or is making one himself, you know he likes you and is sexually craving you in his mind.

14. You are always an example

Men don’t like to hear about their women speaking about other men or even looking or talking to other men. They just can’t tolerate it if they want you sexually. If you have ever noticed that he gets too annoyed or irritated at the thought of you talking about other men, or other men touching you, he might be getting jealous which can indicate his sexual liking towards you.

Well, these were the written signs but let’s be real you are the best judge because no one else has seen or been with your man – so trust your gut when it can’t resist but pick on signs that scream that your man is attracted to you sexually! 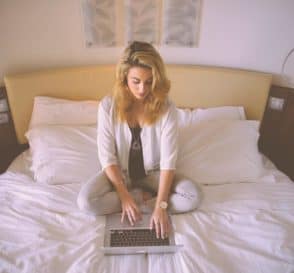 It is said that younger men are usually more attracted to older women than those of the same age. Most …
John Santana|July 5, 2019|Blog Cougar|No Comments

John Santana is a 29-year old Irish Guy who loves everything about Dating and Romance. He believes that dating can and should be fun if you do it the right way. With the same beliefs, he shares everything what works and what doesn't works for him on The Absolute Dater, a go-to resource for Modern-day dating. When not talking about Dating, he can be found playing Golf at Cabot Cliffs or hiking at Larch Tree Valley with his friends.